This whole "alternative careers" thing isn't worth the fuzz

That is the main career path, the one followed by ~90% of grad students and postdocs, the one that involves leaving academia at some point, that is not paid enough attention to. Even though most people who are working in academia this very moment will eventually leave academia, they don't receive enough training to prepare them for this step. This is bad.

Conversely, the "alternative path", taken by only 5-10% of people, which eventually leads to a tenure track position in a research university, is surprisingly well covered. All these postdocs, publications, conferences... All for one small alternative path. Isn't it strange?

So stop complaining about "alternative careers", and better concentrate on the "mainstream career": the one that leads out. At least pay some attention to it. Think of it. It's much more realistic.
Posted by khakhalin at 5:10 PM Links to this post

Email ThisBlogThis!Share to TwitterShare to FacebookShare to Pinterest
Labels: academia

Wow, bad news. Just half a year passed since I started reading Neuroscience-related blogs on a regular basis, and now Google takes from me the way to read them. I almost can not believe it. Google Reader seemed to be such a great, sane alternative to all these attention-snatching noisy services like Facebook and Twitter... Slow, careful, thoughtful environment. And now it is there no more. What a shame!

Here's a nice discussion about the whole affair. And, well, I don't yet know what to do. Maybe I'll find another RSS aggregator (maybe this one, or this. Or maybe this.). But just in case, let me list here some key blogs I read. Just as a reserve copy (even though this blog platform is also owned by Google... oh screw it!)

(cups his hands around the mouth and shouts) - Google, if you hear me, don't be evil!

The Wheel of Time book series: the dynamics of sequel ratings

I am reading The Wheel of Time series. I've just finished volume 3, and by now I am somewhat tired, but not quite tired yet to quit. Still I am kind of unsure and undecided about whether I should go further or not. Or maybe take a break. Or maybe skip a volume or two.

To answer this question I downloaded book ratings from GoodReads, and visualized them. So for those of you who care, let me share the results =) 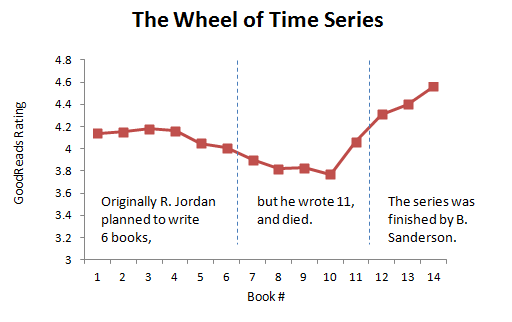 Most books are rated by quite a few people (about 30 thousands at least), so in terms of the spread these values should be quite tolerable. The biggest methodological problem with these numbers is that the further into the series, the more faithful and fantasy-oriented the readers in the pool would become, and it should certainly introduce a bias. I prefer to ignore this bias however, as I have no idea about its direction! More faithful readers may score the books slightly higher (because they are faithful, and so like them!), but at the same time they are also humans, and so they should gradually get tired, and thus score the books lower compared to the first volume. Also faithful readers may have higher standards for the books of this kind, as presumably they read dozens of them; unlike those who only "tried" the series... So, I don't know how to correct for this bias. Let it be.

Another thing we could look at in the GoodReads data is the "Readers retention score": share of people who managed to read book #i+1 after finishing the book #i. There's a pretty stable decline in reader numbers through the series, with the first book scored by 96 thousand people, and the twelve-st scored "only" by 38 thousands. At the same time, surprisingly, if you calculate the retaining index, it doesn't change that much across the series, except for a huge outlier at the book #11: the last one R. Jordan managed to write before he succumbed to cancer. I don't yet know whether the book is really that good, or whether it is just extremely intriguing, or maybe fresh, or maybe people paid attention to this whole real-life story around the fantasy world, with one author dying, but leaving extensive notes to his colleagues to finish the series... It may be. But it means that at least this book should probably be read, even if I decide to skip a few in the middle. 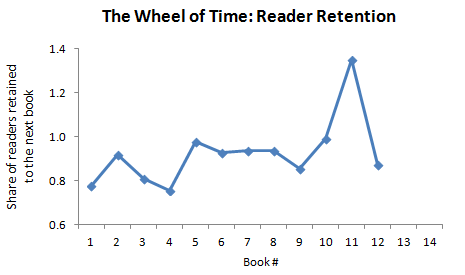 I can not use this index to measure books #13 and 14, unfortunately, as book #14 is the last one (i+1 doesn't exist), while book #13 was published too recently, and so has a relatively low number of readers. I guess, it also means that this plot has an even stronger positive bias just because of unequal exposure of books to time, so to say. It does probably also have a positive bias due to the "self-selection of faithful readers" described previously... Still it is funny that the "retention values" don't correlate with the rating at all (r = -0.2; p = 0.5). It's kind of weird.

Anyway, for me personally this data probably means that I'll try the fourth book. But if it doesn't quite work, I'll skip straight to book #11.
Posted by khakhalin at 3:20 PM Links to this post

I have stumbled upon a song that neatly summarizes my experiences as a postdoc. It may not be 100% true, but it covers most of the phenomena! It is actually surprising that the title of the song doesn't even mention postdochood. At the same time, it may be a conscious omission. Just to make the hints more obvious =)

Posted by khakhalin at 12:58 PM Links to this post

In support of Gmail (and against Microsoft)

I hate Microsoft's "Scroogled" campaign so much that I will even post about it.

So, they claim that Google reads your mail (mainly to provide you with contextual ads, they admit), and it is a breach of your privacy, and so (surprise!) you should switch to Outlook. All heavily stylized, on a red background, with almost-blinking exclamation marks, and so on.

So, let me elaborate why Microsoft is wrong, and Gmail is actually good:


That's two good points in favor of Google. Now two bad points against Microsoft:
Posted by khakhalin at 10:23 AM Links to this post