Xykademiqz wrote another wonderful and provocative post about how she hates when people ask her about where she is from. She finds it annoying; she suspects that people are trying to categorize her, and also hint that she doesn't really belong. All I can do is disagree again. It is my personal disagreement; I don't even pretend that it can be generalized, but my story (or my perception of it) seems to be different.

I strongly dislike Vladimir Putin as a person and as a politician, but I can't deny that his reign had certain positive influence on my life. He gave me a universal topic for small talk. Or big talk, if you have time and nerves for it!

Unlike Xykademiqz I can't talk about sports. I just don't know how they work; I tried, sincerely tried to understand the rules of American Football, but they elude me. All I can see when I look at this game, or even as much as think about it, is one constant never-ending concussion, dying neural cells and microglia activation, sprinkled with beefy machismo and gender stereotyping. I just can't stand it. I wish I could, but it doesn't work. Baseball is better, but I still don't know the rules. At least baseball has something to do with the evolution of humans; this fact puts me somewhat at peace with the existence of this game; but still I can't reasonably talk about it.

What else can one talk about? Weather is boring. We don't have a TV at home, and we don't go to movies, except maybe kids movies. Politics is largely off limits as a conversation topic in the States, and so is religion, which is really a shame, as at least these topics are interesting. What is left?

Xykademiqz says that she'd rather talk about work. Well, I tried, and got some very mixed results. I am a neuroscientist, and neuroscience sounds like an interesting thing: everybody can relate to it. About half of my conversants would typically share a story of their beloved one having a stroke, and ask for my advice, because they mistake me for a doctor. Another half would ask me about meditation, as apparently neuroscience of meditation was featured in quite a few NYT articles in last year or two. Both topics predictably baffle me; I'd like to say something meaningful, but I can't, as I don't know anything about either stroke or meditation. Maybe I'm just really bad at small talk (which is, by the way, most likely true).

Compared to all these options, discussing where I am from is a golden mine! An open vein with nuggets of pure gold lying right on the surface. From Putin we can move to the definition of democracy, or to politics of homosexuality, or the perils of propaganda - all the time staying safely away from local US politics; all on virtual Russian soil! And if you prefer weather to politics, well, Russia is perceived as a cold country (even though Moscow is actually not colder than Minneapolis; zoom out to see the plots). Another great entry point for all kinds of entertaining conversations.

Maybe in a few years this won't work that well anymore. Maybe in 20 years it will become annoying. Yet for now, I almost love when people ask me where I am from. (To be honest, I usually inform them first, because I don't want them to suffer and ponder hesitantly whether they could possibly ask me or not). Yep, I'm from there. No, we lived in boring Moscow, nothing special - I appreciate that you know that Russia is big, but unfortunately I can't claim being from some exotic part of it. But you know what? I'd really like to know what you think about recent events in Russia, as the perception of my former country is genuinely interesting to me. And if you can tell me about your origins, be it a small town in the States, or a small country in Europe, - even better! That's one of the most fascinating topics for a small discussion!
Posted by khakhalin at 11:32 PM Links to this post

On the last day of SfN, before leaving for a plane, I was so tired that I could no longer think about science. I just could not force myself look at the posters and make a mental effort of understanding what is shown on them.

So instead, on the back side of my printed itinerary, I started counting how many spectators were standing in front of every poster, and also recorded the gender of the presenter. It was an instantaneous snapshot of one SfN poster session, and while it is not necessarily representative, I thought it could be fun to analyze offline. 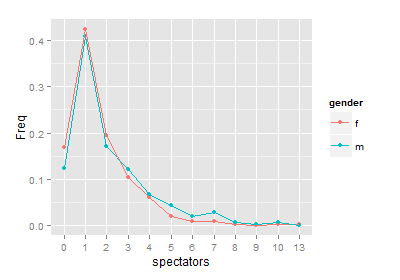 Now I'm wondering if I ran ancova correctly; never tried it before...

Posted by khakhalin at 5:59 PM Links to this post

Email ThisBlogThis!Share to TwitterShare to FacebookShare to Pinterest
Labels: diversity

On work ethics in academia

A really nice (very long, but very thoughtful and useful) post about work ethics in academia:

The post has lots of interesting thoughts, and like two dozens of very vivid and spot-on real life observations, but in some ways it all boils down to this one phrase:

>  I think if the students actually tried to work, but really work, 40 hours per week, a lot of work would get done. A. LOT. The problem is that most students in graduate school do not actually work even close to those hours.

My reply:
(and I think I might have written it before, but I can't help but repeat myself again)

This is very true. I worked in business and in academia, and I can confirm that my productivity was much, much higher in business. The nature of academic work is pretty weird:

1) Our external reward comes some 2-5 years after the effort (not even when your paper is published, but when it gets cited!)
2) Our main activity (thinking) is very similar to daydreaming. It's just so hard sometimes to make sure which one is happening.
3) We are supposed to leave space for procrastination (as you mentioned in one of the comments: it's a creative activity, you have to get stuck every now and then).

So it's really, really hard to get yourself to work. Academic work just goes against the rules of our brain; against all intuitions. In my experience, forcing yourself to work is actually the only thing that matters in research. Or nearly the only one.

The sad part of this story though is that the majority of slackers make the minority of hard-workers suffer as well. Even if you work really well, the sheer amount of slackers doom upon you, press you with anxiety of never getting a job just because of bad luck, or family situation, or something like that. So even those people who have everything in them to enjoy grad school sometimes end up not enjoying it. That's the saddest part of this whole situation for me, and I am not quite sure what I would even recommend to do about it...

(Note: I don't consider myself a hard-worker, unfortunately. I'm fighting this battle daily, and I win only about one half of these skirmishes...)
Posted by khakhalin at 12:18 PM Links to this post